356. The park and gardens at Carlsruhe are situated on a level surface; and may be perfectly comprehended from the published plans and views. The park (fig. 106., taken from a plan published when it was first laid out. and before the town had attained any thing like its present size) is a natural forest of oaks and pines, pierced with thirty-two avenues, all radiating from the central tower of the chateau or palace (fig. 107.). The palace is a heavy, hospital-looking building, dull and dreary without, and ill-furnished and neglected within. It is however noticed by Sulzer (Theorie des Beaux Arts, &c.), and by Hirschfeld as one of the finest in Germany; and, as remarkable in that country, for having the wings at an oblique angle with the main body of the building. Behind, exactly in the centre of a circle, the circumference of which forms the promenade (b), is a tower (c), which commands a bird's-eye view of the whole park, pleasure and kitchen gardens (d), the town and church (e), greatly increased in size since this place was made, and of the surrounding country, far into France on one side, and to the mountains of the Black Forest on the other. The park and gardens, together with the palace, were laid out by Berceau, a French architect, in 1715. In the parterres were curious patterns strewed with different-coloured sands, broken glass, porcelain, shells, &c. the main walks were bordered with box, and yew and hornbeam hedges. These have been since destroyed, and an open lawn, varied by groups in the natural manner, forms now the main feature from the garden front of the palace. The natural, forest scenery is increased in interest by the introduction of exotics, and especially evergreens, along the margins of the alleys and walks. Here the hemlock spruce, Norway spruce, silver fir, Weymouth pine, and arbor vitï¾µ have an admirable effect. Except in front of the palace, there are scarcely any glades of turf; and there being in consequence very little mowing, and no clipping of hedges, the pleasure-ground part of Carlsruhe garden is kept up at very little expense. Exclusively of what is seen in the plan (fig. 108.) there is a park for deer of 400 acres. All the gardens and park scenery at Carlsruhe are at all times open to the public; and they are rendered the more agreeable, during the summer season, by a band of music which perambulates the grounds, and is heard, at short intervals, from morning till night. The gardener who showed us through the grounds in 1828, M. Napoleon Vernier, a Frenchman, a poet, and an enthusiast, informed us that it was delightful to work in them, because the nightingale sang from the evening till the morning; the military band began to practise before breakfast; the rehearsal at the opera house, which is close to the garden, succeeded; and this was followed by the ambulating band in the woods, which continued to play during the remainder of the day. 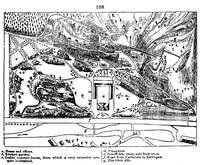 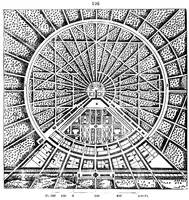