Hothouses for bulbs and cacti

2128. For bulbs and cacti, 'a paved watertight bottom may be built on stones, or any suitable support, with a declivity of 1 in. in 10 ft., to any convenient point, for the purpose of drainage, as shown in figs. 620. and 621. Channels are formed about 3 in. deep, and the same width, crossing each other, as shown in fig. 621., which also represents two small steam-pipes, each three quarters of an inch in diameter, closed at the farther end, and having perforations about one tenth of an inch in diameter opposite each other, and in the middle of the channels. The result is, that when steam is admitted into the pipes, it is discharged in opposite directions, through the orifices, filling the whole space of the channels with hot vapour; the channels being covered with brick or stone, jointed without mortar, as shown in fig. 620. The vapour which percolates between the joists is arrested by a bed of stones or broken bricks similar to those used in fig. 619., and about 14 in. in depth above the paved bottom; on this again is placed a bed of sand about 1 ft. deep, in which the pots are plunged to any suitable depth. The vapour is so completely arrested by the strata of stones and sand beneath the pots as to communicate a heat congenial with the health of the plants without the least excess of moisture.' 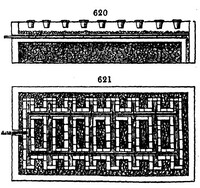