2127. For heating pine pits. Figs. 618. and 619. represent a mode of obtaining bottom beat, by means of ' a cistern of water heated by small steam-pipes, which are introduced near the bottom, leaving only sufficient drainage to take away the condensed water. The depth of water in the cistern is about one foot, which is warmed, generally about twice a day, by menus of two one-inch steam-pipes, each going to the farther end of the cistern, and returning again in the opposite direction, as shown in fig. 619.; by this means the heat is very easily distributed. At each end of the cistern, a small passage (a) is left for the purpose of ascertaining the temperature of the water; and this passage will, if left open, admit considerable humidity to the house or pit. Across the cistern are laid joists, which support a paving of stone or brick, laid without mortar, on which is placed a bed of broken stones or bricks about one foot in thickness, which, towards the top, are about the size commonly used for macadamising the public roads: this is again covered with a bed of ashes, in which the pots are placed, as in the usual way.' 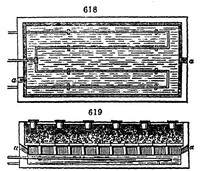