Near the middle of the woody ground a space was cleared that would be large enough to be sunny throughout the greater part of the day. This was for Cistuses. It is one of the compensations for gardening on the poorest of soils that these delightful shrubs do well with only the preparation of digging up and loosening the sand, for my soil is nothing better. The kinds that are best in the woody landscape are C. laurifolius and C. cyprius; laurifolius is the hardiest, cyprius rather the more beautiful, with its three-and-a-half-inch wide flowers of tenderest white with a red-purple blotch at the base of each petal. Its growth, also, is rather more free and graceful. It is the kind usually sold as ladaniferus, and flowers in July. C. laurifolius is a bush of a denser habit; it bears an abundance of bloom rather smaller than that of C. cyprius, and without the coloured blotch. But when it grows old and some of its stems are borne down and lie along the ground, the habit changes and it acquires a free pictorial character. These two large-growing Cistuses are admirable for wild planting in sunny wood edges. The illustrations show their use, not only in their own ground, but by the sides of the grassy ways and the regions where the wood paths leave the lawn. The sheltered, sunny Cistus clearing has an undergrowth of wild heaths that are native to the ground, but a very few other Heaths are added, namely, Erica ciliata {Erica ciliaris} and the Cornish Heath; and there is a fine patch at the joining of two of the little grassy paths of the white form of the Irish Heath (Menziesia, or Daboecia polifolia) {Daboecia cantabrica}. 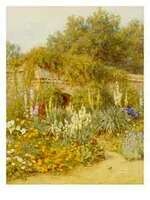