The embellished farm (ferme ornee) is a pretty mode of combining something of the beauty of the landscape garden with the utility of the farm, and we hope to see small country seats of this kind become more general. As regards profit in farming, of course, all modes of arranging or distributing land are inferior to simple square fields; on account of the greater facility of working the land in rectangular plots. But we suppose the owner of the small ornamental farm to be one with whom profit is not the first and only consideration, but who desires to unite with it something to gratify his taste, and to give a higher charm to his rural occupations. In Fig. 27, is shown part of an embellished farm, treated in the picturesque style throughout. The various trees, under grass or tillage, are divided and bounded by winding roads, a, bordered by hedges of buckthorn, cedar, and hawthorn, instead of wooden fences; the roads being wide enough to afford a pleasant drive or walk, so as to allow the owner or visitor to enjoy at the same time an agreeable circuit, and a glance at all the various crops and modes of culture. In the plan before us, the approach from the public road is at b; the dwelling at c; the barns and farm-buildings at d; the kitchen garden at e; and the orchard at f. About the house are distributed some groups of trees, and here the fields, g, are kept in grass, and are either mown or pastured. The fields in crops are designated h, on the plan; and a few picturesque groups of trees are planted, or allowed to remain, in these, to keep up the general character of the place. A low dell, or rocky thicket, is situated at i,. Exceedingly interesting and agreeable effects may be produced, at little cost, in a picturesque farm of this kind. The hedges may be of a great variety of suitable shrubs, and, in addition to those that we have named, we would introduce others of the sweet brier, the Michigan or prairie rose (admirably adapted for the purpose), the flowering crab, and the like-beautiful and fragrant in their growth and blossoms. These hedges we would cause to grow thick, rather by interlacing the branches, than by constant shearing or trimming, which would give them a less formal, and a more free and natural air. The winding lanes traversing the farm need only be gravelled near the house, in other portions being left in grass, which will need little care, as it will generally be kept short enough by the passing of men and vehicles over it. 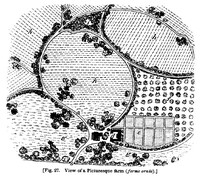