1596. Public squares, of such magnitude as to admit of being laid out in ample walks, open and shady, are almost peculiar to Britain. The grand object is to get as extended a line of uninterrupted promenade as is possible within the given limits. A walk parallel to the boundary fence, and at a short distance within it, evidently includes the maximum of extent; but if the enclosure is small, the rapid succession of angles and turns becomes extremely disagreeable, and continually breaks in upon the pas des promeneurs, the conversation of a party, or individual contemplation. The angles, therefore, must be avoided, by rounding than off in a large square; in a small one, by forming the walk into a circle; and in a small parallelogram, by adopting an oval form. In laying out a large square (fig. 277.), four objects ought to be kept in view. 1. Sufficient open space (a), both of lawn and walk, so that the parents, looking from the windows of the houses which surround the square, may not long at a time lose sight of their children: 2. An open walk exposed to the sun, for winter and spring (b): 3. A walk shaded by trees, but airy, for summer (c): 4. Resting-places (d); and a central covered seat and retreat (e), which being nearly equidistant from every point, may be readily gained in case of a sudden shower, &c. The statues of eminent public men are obvious and appropriate decorations for squares. Russell Square, laid out from a design by Repton in 1810, is one of the most complete in these respects in London. It has been objected to as over-planted; but this is only a piece of vulgar injustice, applied indiscriminately to every rural artist, all of whom, as a matter of course, conclude that when magnitude effects the purposes of number, the superfluous plants will be rooted out. Sloane Square is very ingeniously laid out as a botanic garden, by which means the surrounding inhabitants have an easy opportunity of blending recreation with instruction. This plot being a parallelogram or long square, and the ground being low, Repton proposed to form it into a winding valley, containing a piece of water; the walks to be winding, the trees grouped, and the whole contrived so as to produce an appearance of nature in the midst of art: but his advice was not complied with. The poet-laureate, Pye (Essays), purposed to lay out a square in imitation of a wild overgrown quarry or gravel-pit, and to plant it with thorns, hollies, furze, brambles, ferns, &c. This mode he would adopt on account of the contrast which it would produce to suburban garden scenery generally. 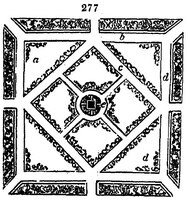