1588. Variation may be made in this extent of accommodation, by adopting a different form for the ground-plan of the plot; by different inclinations of surfaces, kinds of fence, sort of materials used for the roof and walls of the house, colouring of the walls, and, above all, by adopting different styles of architecture. But whatever is done in this respect, no attempt at ornament or picturesque effect should be made which is at variance with comfort: latticed windows are cold and comfortless; and chimney-flues tortured in their direction, with a view to fixing the stack of chimney-tops in some particular point of view, occasion smoky rooms. A variety of other deviations from common practice, made to gratify the eye of the beholder, without any reference to the inhabitant, might be mentioned; but we shall only add, that whatever is most comfortable and durable will please the best in the long run. That every reasonable comfort within is compatible with an architectural or picturesque exterior, we have rendered obvious in our Encyclopï¾µdia of Cottage, Farm, and Villa Architecture: and we here give four designs; one (fig. 273.) a bailiff's cottage, serving also as a porter's lodge, erected in the north of Ireland; another (fig. 272.) a gardener's house, designed by Mr. Lamb for a gentleman in the south of England; the third a gardener's house, erected at Redleaf, near Tunbridge Wells, the seat of the late William Wells, Esq.; a residence which, in point of scenery, of a choice collection of plants in the grounds, of pictures in the house, and of the very highest keeping throughout was, perhaps, during the lifetime of its late proprietor, the finest small place in England; and the fourth (fig. 274.) a small lodge, also designed by Mr. Lamb, for a villa in Kent. The bailiff's cottage, serving also as a porter's lodge, was erected in Ireland, and is taken from that excellent work, Hunt's Tudor Architecture. 'It is designed,' Mr. Hunt observes, 'rather to produce an agreeable and picturesque effect, than to accord with any fixed rules or cus toms of art: such, indeed, was the practice towards the latter end of the sixteenth century, when it would appear that, like the fashion of the present day, every man wished to display his taste and learning in architecture. The entrance to the park is formed by a simple wooden gate within an arched aperture, strengthened by buttresses; which, as they are obviously useful, may be appropriately introduced.' (p. 87.) The ground plan of fig. 272. is in the form of a cross; one projection forming the front entrance, and containing a lobby and staircase, and the opposite one containing a back kitchen. On entering the main body of the house, there are a kitchen to the left, and a parlour to the right. The staircase leads down to two good cellars, and up to four bed-rooms. The gardener's house at Redleaf (fig. 275.) was erected from a design by the late proprietor, who not only made the general sketch, but the working drawings of all the parts. The work was executed by his own carpenter and bricklayer, from materials found on the estate. The plan is somewhat different from that here given (fig. 276.), which contains an entrance porch (a), lobby(b), kitchen (c), parlour (d), family bed-room (e), and dairy (f). From the kitchen a stairase leads up to three sleeping rooms in the roof, and down to the cellar, pantry, &c. A shed for fuel (which in that part of Kent is chiefly wood), and other necessary conveniences, are placed at a short distance. The plan of fig. 274. is very simple. The porch, or lobby, has two doors, and between them a staircase. The door on the one hand opens into a kitchen, and that on the other into a parlour, having a small bed-room adjoining. The staircase leads up to two garret bed-rooms and a closet, all lighted from the roof, and down to two good cellars. These cellars are not only of great use throughout the year for keeping beer, and as lumber rooms; but, in winter, they are also valuable for preserving roots, such as potatoes, carrots, &c. and, in summer, for keeping various articles of food and drink cool and fresh. Cellars should never be wanting in cottages. 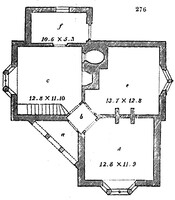