1683. For keeping a register of the temperature of hothouses and the open air, a book with columns may be adopted, or a table (fig. 297.) may be fixed on, in which the vertical lines representing days of the month, and the horizontal ones degrees, the variations of each house, and the open air, may be shown by wavy lines made by daily increments depressed or raised, according to the rise or fall of the thermometer in each separate house or place. Twelve tables, or twelve pages of an oblong folio book ruled in this way, would keep a register of all the hothouses, frames, and the open air of a garden for a year, A very beautiful graphic mode (fig. 298.) of recording the variations of temperature of the open air, or of any one hothouse during a year, is given by Howard, in his Climate of London, a simplification of which may be adopted by the curious gardener. Here the indicating line waves upon a circular zone, composed of radiating lines, representing time, and concentric circles representing degrees of heat. One line represents the average temperature of the year: all the degrees exceeding the average temperature are projected beyond this line towards the extremity of the zone; and all the degrees under the average are projected from the average line towards the inner circumference of the zone. A series of tables of this sort might prove useful to the gardener, by enabling him, at all times, by a simple glance, to compare the present weather with that of several past years, Howard's nomenclature of clouds, already given (1375.), deserves also the study of the gardener desirous of scientifically registering the weather. (Encyc. Brit. Sup. vol. iii. art. Cloud.) 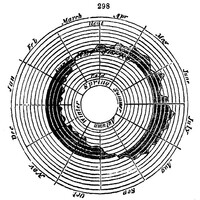