The pupa or chrysalis

1616. The pupa or chrysalis is the next state of insects. When the larva is full fed, it retires either into the earth, or to some secure situation, where its metamorphosis takes place in a few hours. The pupï¾µ are as various in their forms and in their situations as the larvï¾µ. Those of the beetle tribes are found in the earth, or in other substances; they have usually the rudiments of feet, and of other parts which become fully developed only in the perfect state. The pupï¾µ of butterflies are entirely naked; and are either suspended by the tail, or attached to trees, walls, &c., by a strong transverse thread. Moths, on the contrary, pass this period of their existence either enveloped in a bag or cocoon of their own spinning, or the chrysalis is found naked and buried in the ground. The pupï¾µ of flies and other two-winged insects are usually smooth, oval, and affixed externally or internally to those bodies which have given sustenance to the larvï¾µ. The duration of the chrysalis state varies according to the species. There are some insects which undergo such a trifling change that it is scarcely perceptible; in general, however, the pupï¾µ are torpid, inactive, and incapable either of receiving nourishment or of moving about. As examples of the most common forms, we give those of the cockchafer, (fig. 279. a), the turnip butterfly (b), the peacock butterfly (c), the currant moth (d), the gooseberry moth (e), the crane-fly (Tipula cornicina, f), Phryganea rhombica (g), Musca pumilionis, natural size and magnified (h h). 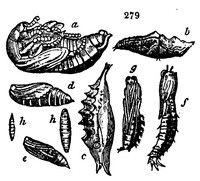