1645. The Hawk Moths (Sphingidï¾µ) form the second division of lepidopterous insects. They are principally distinguished by their antennï¾µ being thickest in the middle, and formed of three sides. They are only to be seen on the wing before the rising and after the setting of the sun; at which times their flight is so extremely rapid, that the eye cannot distinguish either the motion of their wings, or the colours which ornament them. Some few European species of the lesser tribes fly, however, during the heat of the day. The major part undergo their metamorphosis in the ground, and thus differ essentially from butterflies. Nineteen or twenty species inhabit Britain, and of these about twelve are of a pretty considerable size. The caterpillars of the larger kinds are, in general, very beautiful; and are easily known from those of butterflies, and of other moths, by a sort of horn or curved process, situated on the last segment of the body: none of these are found to be injurious, either to the gardener or the farmer; on the contrary, they may be classed, as we have before observed, with the ornamental butterflies. Fig. 287. represents the Privet Hawk Moth, reduced in size, with its egg of the natural size, and magnified (b); and its chrysalis (a). 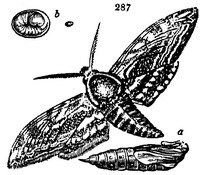