1632. The cock-roach, called by some the black beetle, belongs to an extensive family. The most pernicious species in England is the Blatta orientalis (fig. 282. c). It is now naturalised in every part of Europe, although originally imported from India. Like most of its tribe, it shuns both natural and artificial light. In the London houses, particularly in the rooms on the ground floor, it is often very abundant, and indiscriminately devours bread, meat, flour, and all household stores: as soon as light appears, however, it will scamper off as fast as it can, and vanish in an instant. A basin or glass vessel baited with bread, and set at night in places which they frequent, is the best trap for them. The eggs are contained in a singular horny case (a), internally divided into a number of transverse partitions or cells; the case is rather flattened, and quite smooth, except on one side, which is toothed. The larva, the pupa, and the female (b), are without wings, the latter being larger than the perfect male insect (c.). 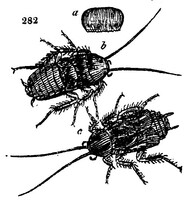