1653. HEMIPTERA. The chief character of this order is that the mouth is in the form of a slender and lengthened proboscis, which, when not used, is folded beneath the breast, but not coiled up, as in the lepidopterous insects. The wings are four, of unequal size, two of which are always clear, and the others are generally semi-transparent. The transformations of this order resemble those of the Orthoptera, the larvï¾µ and pupï¾µ being active and resembling the perfect insects except in wanting organs of flight. One division of this order, the bugs (Cimicidï¾µ), feed upon other insects, by sucking their juices, and are consequently in no respect injurious to gardens. The other division feed upon vegetable juices, and among these we find the cicadas or frog-hoppers, the aphides, or plant-lice, and the cocci, or scale insects. Few of the larger or more remarkable plant-sucking Hemiptera are found in Europe, but tropical America produces some of the most whimsical and grotesque forms, as Membracis ensata (fig. 288. a a), M. fuscata (b), and M. spinosa (c). The frothy secretion often seen in summer upon different plants is caused by the larva of the common frog-hopper (Aphrophora spumaria), a specimen of which of a green colour is always to be found in the middle of the mass. 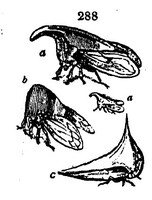