Some of the squares have finer trees than others, and in many a statue is a feature. Originally these statues formed the central object towards which the garden paths converged, but most of the central statues have been moved, though in a few, like St. James's and Golden Squares, they are still in the middle. These statues were evidently a good deal thought of by Londoners, but they did not strike foreigners as very good. In one of Mirabeau's letters he writes in 1784 from London: "The public monuments in honour of Sovereigns, reflect little honour on English Sculpture.... The Statues of the last Kings, which adorn the Squares in the new quarters of London, being cast in brass or copper, have nothing remarkable in them but their lustre; they are doubtless kept in repair, cleaned and rubbed with as much care as the larger knockers at gentlemen's doors, which are of similar metal." The usual plan now is to place the statue facing the street, where a background of green shows it off to the passer-by. Thus Lord George Bentinck is prominent in Cavendish Square, from which the equestrian central statue of the Duke of Cumberland has gone; and from Hanover Square, built about the same time as Cavendish (between 1717-20), Chantrey's statue of Pitt gazes down towards St. George's Church. In Grosvenor Square no statue has replaced the central one of George I. by Von Nost, which was placed there in 1726, and is described by Maitland as a "stately gilt equestrian statue." This Square is older than the two last mentioned, having been built in 1695. In those days each of the spacious houses had its large garden at the back, with a view of the country away to Hampstead and Highgate. The garden was designed by Kent, but a plan of it about 1750 shows a considerable difference between the arrangements then and now, although some details are the same. The raised square of grass in the centre where the statue stood has now a large, octagonal, covered seat, apparently formed with the old pedestal. The walk round and the four wide paths to the centre are retained, but the smaller intersecting paths are replaced by lawns on which grow some fine old elms. The railings with stone piers and handsome gates, shown in the engraving, have given place to much less ornamental iron rails. 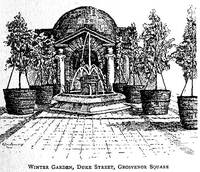