Re design of The Mall for the Victoria Memorial

Yet once more has St. James's Park been subjected to renovation. The work, which is a memorial to our late beloved Queen Victoria, is not yet completed, so its description must be imperfect. The design aims at drawing together the several quarters of the Park towards Buckingham Palace and a central group of statuary. The Mall is now the scene of ceaseless traffic, and the sauntering pedestrian is a thing of the past. A wide road runs at right angles across the Green Park, and so once again more closely associates the Upper with the Lower St. James's Park. Probably the greatest praise of the alterations would be to say that Le Notre would have approved them. They seem to complete the design in a fitting manner, but they banish once and for all time, the semi-rural character which for so many centuries clung to the Park. The design includes a series of formal parterres which are filled with bedding-out plants raised in Hyde Park. In the summer of 1906 they were planted with scarlet geraniums with an edging of grasses and foliage and a few golden privets, and on hot July days there were many people ready to pronounce the arrangement as extremely bad taste. It seemed a reversion to the days when a startling mass of colour was the only effect aimed at. As they appeared all through the mild October days, when a soft foggy light enveloped the world, and the trees looked dark and dreary, with their leaves, devoid of autumn tints, still struggling to hold on, the vivid colouring of the beds gave a very different impression. The charm of the warm red tone against the cold blue mists must have given a sensation of pleasure to any one sensitive to such contrasts The Park in spring has nothing of the stiff, early Victorian gardening left. Under the trees crocuses raise their dainty heads, as cheerily as from out of Alpine snows, and the slopes of grass spangled with a "host of golden daffodils" are a delight to all beholders. 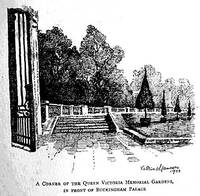