One of the most striking features of Hyde Park to-day is the long sheet of water known as the "Serpentine," but this was a comparatively late addition to the attractions of the Park. From earliest times there was water. The deer came down to drink at pools supplied by fresh springs. The stream of the West Bourne flowed across the Park from north to south, leaving it near the present Albert Gate. Near there it was spanned by a bridge, from which the hamlet of Knightsbridge derived its name. The water in the Park was used to supply the West End of London as houses began to be built further from the City, and Chelsea was also supplied from it. The Dean and Chapter of Westminster had a right to the use of the water from the springs in the Park, and the history of their privilege is recorded on a stone which stands above "the Dell" on the northeast of the bridge across the end of the Serpentine. The inscription states that a supply of water by a conduit was granted to the Abbey of Westminster by Edward the Confessor, and the further history of the lands, which passed into Henry VIII.'s hands at a time when all church property was in peril of seizure, is neatly glossed over as the "manor was resumed by the Crown in 1536." The use of the springs, however, was retained by the Abbey, and confirmed to them by a charter of Elizabeth in 1560. Later on the privilege was withdrawn, and in 1663 the Chelsea Waterworks were granted the use of all the streams and springs of Hyde Park. They made in 1725 a reservoir on the east side of the Park, opposite Mount Street. The sunk garden, with the Dolphin Fountain, the statue in Carrara marble, and the basin of Sicilian marble, by A. Munro, was made in 1861 on the site of this reservoir, which was abandoned two years earlier. It has been stated that this sunk garden was a remnant of the forts of Cromwell's time, one small one having been near here, but the history of the Chelsea Waterworks reservoir must have been unknown to those who believed the tradition. It contained a million and a half gallons of water, and was protected by a wall and railings, as suicides were once said to have been frequent. When the Serpentine was made by Queen Caroline, considerable compensation had to be paid to the Waterworks Company. In this age of experiments in plant growing, when American writers glow with enthusiasm on the wonders of the "New Earth," and when science has transformed the dullest operations of farming and gardening into fields for enterprise and treasuries of possible discoveries, it is humiliating to find the water in Hyde Park being used for like experiments as long ago as 1691-92. Stephen Switzer, a gardener, who would have been described by his contemporaries as a "lover of ingenuities," was fond of indulging in speculations, and studied the effect of water on plants. He quotes a series of experiments made by Dr. Woodward on growing plants entirely in water, or with certain mixtures. For fifty-two days during the summer of 1692 he carefully watched some plants of spearmint, which were all "the most kindly, fresh, sprightly Shoots I could chuse," and were set in water previously weighed. For this trial he selected "Hyde Park Conduit water" - one pure, another had an ounce and a half of common garden earth added to it, a third was given an equal quantity of garden mould, and a fourth was kept on "Hyde Park water distilled." The results in growth, and the quantity of water absorbed, were carefully noted at the end of the time. 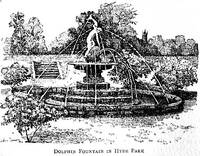