Most of the other patches of green in the City are disused burial-grounds, and are considered in a chapter by themselves. Beyond the City, on the east, in the Mile End Road, is the quiet old Trinity Hospital. It stands on the north of that wide road, which might be made one of the most beautiful entrances to the City. The simple good taste of these delightful old almshouses is a great contrast to some of the surroundings. They were probably designed by John Evelyn, with the assistance of Wren. His father-in-law, Sir Richard Browne, founded and built very similar almshouses at Deptford, long since swept away. Of these Evelyn writes, "It was a good and charitable work and gift, but would have been better bestowed on the poor of that parish than on seamen's widows, the Trinity Company being very rich, and the rest of the poor of the parish exceedingly indigent." In spite of these sentiments, he is believed to have had a hand in the Mile End Almshouses, which were founded by Captain Henry Mudd of Ratcliffe, Captain Sandes or Sanders, and Captain Maples. The two last are remembered by statues still standing in the little formal gardens. Maples, who appears in the dress of a naval officer of the period, left a fortune for the use of the guild in diamonds, collected in India, where he was an early pioneer, and where he died in 1680. A similar endowment in Hull is described in a poem in 1662:- "It is a comely built, well-ordered place, But that which most of all the house doth grace Are rooms for widowes, who are old and poore, And have been wives to mariners before." Certainly Trinity Hospital, Mile End, is comely and well ordered. The pensioners take a pride in keeping every nook and corner scrupulously clean. Everything is, in fact, in "ship-shape" order. The grass is neatly mown, the trees on either side well trimmed and clipped. Outside each little house a few plants are carefully tended, the pots arranged with precision, and every flower looked after with pride. It is indeed a peaceful place for these old people to pass their declining years in, and the sight makes the regret for St. Katharine's and the other vanished charitable buildings all the more keen. [Trinity Hospital was built as an almshouse for master mariners. They were damaged by bombing in the Second World War and repaired by the London County Council as housing.] 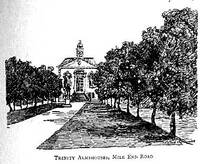