The statue of Charles II. as a Roman emperor, by Gibbons, in the centre of the court, was given by Tobias Rustat. The view over the simple, spacious garden from this central court, to the long balustrade with steps down to the lower terrace, is very satisfying, and in keeping with the stately architecture. The Governor's house has its own special garden, a fine, wide terrace and large, straight beds, and a delightful red-brick wall covered with trailing plants and fine iron gateway. The old pensioners, in their long coats and weather-beaten faces, enjoying their "peace pipe" and their well-earned repose, add very greatly to the picturesque effect of the Garden, and all its surroundings. The churchyard, clearly seen through the railings along Queen's Road from Chelsea Barracks, has an air of dignified repose. It has been closed since 1854. The first soldier buried there in 1692, Simon Box, had served four kings: Charles I., Charles II., James II., and William III. The tombs are much worn with age, and it is no longer possible to find some of those known to have been laid to rest there. Among them are two women who had served as privates; one of them, who died in 1739, Christian Davies or "Mother Ross," had served in Marlborough's campaigns. The extraordinary number of centenarians this small burying-ground contains is astounding. William Hisland surely beats the record, as he was married when he was over a hundred ! He was born in August 1620, and died in February 1732. Another veteran of 112 died five years later, while another, Robert Comming, who was buried in 1767, was 115, and before the end of the eighteenth century three others, aged respectively 102, 111, and 107, were interred. The eldest of these three, who died in 1772, had fought in the Battle of the Boyne! It certainly speaks well for the care and attention bestowed on them in the Hospital. 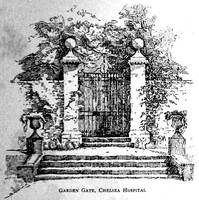