The attractions of the Temple are so great, one feels loth to cross the noisy thoroughfare and plunge through the traffic till the stately old gateway out of Chancery Lane, on which Ben Jonson is said to have worked, affords an opening towards the spacious gardens of Lincoln's Inn. Lincoln's Inn Gardens have a special claim to antiquity as they are partly on the site of the famous garden of the Earl of Lincoln, of which some of the accounts are preserved in a splendid big old manor roll now at the Record Office. It is supposed that at his death in 1311, Henry de Lacy, Earl of Lincoln, assigned these lands to the "Professors of the Law as a residence." Additions were made later from the ground belonging to the Bishop of Chichester, round the palace which Ralph Neville had built in 1228. Part of the site was the "coney garth," which belonged to one William Cotterell, and hence is often mentioned as "Cotterell's Garden." Garden of course only meant a garth or yard, and though the name now signifies an enclosure for plants, in early times other enclosures were common. There was the "grass yard" or lawn, the "cook's garth" or kitchen-garden, and "coney garth" where rabbits were kept, as well as the "wyrt yard" or plant yard, the "ort yard" or orchard, apple yard, cherry yard, and so on. The coney garth was not a mere name, but was well stocked with game, and even at a much later date, from Edward IV. to Henry VIII., there were various ordinances in force for punishing law students who hunted rabbits with bows and arrows or darts. In the first year of Queen Elizabeth the Garden was separated from the fields by a clay embankment, and a little later a brick wall was added, with a gate into the fields, which is probably the same as the present little gate to the north of the new hall, at the end of the border, shown in the illustration. The Garden continued much further along the wall then, and only was curtailed when the new hall and library were built in 1843. The delightful terrace which is raised against the wall overlooking the "fields" was made in 1663. On June 27th of that year, Pepys, who on other occasions mentions his walks there with his wife, went to see the alterations. "So to Lincoln's Inne, and there walked up and down to see the new garden which they are making, and will be very pretty." The outside world seems to have had easy access to the gardens of all the Inns of Court in those days, but it was regarded as a special privilege granted to a very wide circle, and a favour not accorded to the public at large. In the Tatler occur such passages as, "I went into Lincoln's Inn walks, and having taken a round or two I sat down according to the allowed familiarity of these places." Again, "I was last week taking a solitary walk in the garden of Lincoln's Inn, a favour that is indulged me by several of the benchers who are my intimate friends." 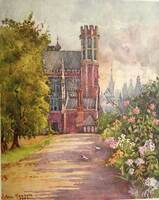