A large proportion of the land affected by mineral working is occupied by mines and quarries with a lifespan of under 10 years [Fig 6.8]. This is because shortï¾­life workings tend to be large in extent and shallow in depth. Concealment is desirable but the most important planning objective is to secure an imaginative afterï¾­use plan before workings start. Surface mining for coal and ironstone caused great devastation in the past. Improvements have been made in temperate countries but the problem is by no means resolved. America has a long history of surface mining and, until the 1960s, a very poor record for land reclamation. From 1930ï¾­1971, 3.65m acres were used for mineral workings and only 1.46m acres reclaimed. The situation changed dramatically when the Surface Mining Control and Reclamation Act was passed in 1977. It is mainly concerned with coal. The Act requires operators to 'restore the land affected to a condition capable of supporting the uses which it was capable of supporting prior to mining, or higher or better uses of which there is a reasonable likliehood' (Committee on soil as a resource in relation to surface mining for coal 1981: 151). Before opening a new mine companies must obtain a licence and a permit. The Act also provides for performance bonds, special protection of scenic areas, water pollution control, backfilling to original contours (unless there is 'an economically preferred postï¾­mining land use), separate handling of topsoil and subsoil, revegetation, a period of liability for successful reinstatement of farmland, and a levy to raise funds for the reclamation of abandoned mines. It has been estimated that the 1977 Act doubled reclamation costs but, even with an abandoned mine levy of $0.35/ton of surface mined coal, the total mining costs per ton are 'only slightly affected' (Committee on soil as a resource in relation to surface mining for coal 1981: 199). In Britain, surface mining of coal and ironstone was regulated by separate Acts of Parliament in the 1950s. The laws are older and less prescriptive than the North American legislation. In 1978 a former director of the National Coal Board's Opencast Executive, claimed that its operations had set an example which other industries could well follow (Davison 1978: 167). He considered the Executive's restoration work to be so good that it gave hope for a full reconciliation between industry and the environment. Some coal reclamation has been well done but few commentators have shared the NCB's opinion. In 1979 the Council for Environmental Conservation (CoEnCo) said: We recognise that the Executive has developed technical skill in restoring a threeï¾­dimensional surface to opencast areas that fits the surrounding contours in a natural way. But is the result a landscape? We believe that as in the case of soil restoration, the landscape restoration that is being currently achieved is only part of what is needed. Many restored areas can be picked out in the landscape from considerable distances because the hedgerows, trees and woodlands that were characteristic of the area have been replaced by fencing only, giving a bald, disjointed appearance. (Council for Environmental Conservation 1979: 22) In 1979 an independent report stated that the agricultural productivity of restored land is low and that 'the contours of the opencast workings stand out stark and alien industrial features which dominate the natural character of the countryside over a wide area' (Brocklesby 1979: 17). The Opencast Executive continued to assert that the land was satisfactorily restored (Tomlinson 1982) but there are weaknesses in the regulation of British surface mining. 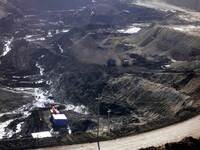