Private enterprise is good at providing pleasure This type of space may be included under the general heading 'public open space' because it satisfies the defining criteria. In 1800 too many of Europe 's urban public open spaces were privately owned. Royal parks belonged to monarchs. Residential squares belonged to great lords. Tea and beer gardens belonged to private landlords. Private pleasure grounds, like Vauxhall in London , were accessible only to the wealthy. In short, there was a powerful case for creating municipal parks. Unfortunately and unsurprisingly, the movement went too far. There is a direct parallel with the case for taking industrial enterprises into public ownership. From the fact that there is a case for some enterprises to be in public ownership, it does not follow that there is a case for all enterprises to be in public ownership. In many countries, there are some public parks which have far too much in common with 1970s public sector industries: outdated work practices, lack of investment, high prices, falling consumer appeal, insensitivity to mark et d ema nd. They deserve a degree of privatisation. Industrial organisations tend to flourish when there is a close relationship between ownership and control. Vauxhall, Ranelagh, and the other London pleasure gardens of the eighteenth century were 'attempts to supply the more lascivious pleasures of the court to the commonalty at a reasonable price per head' (Mumford 1961: 379). The Bal Masque, in France , the German beer gardens, and the Tivoli Gardens in Copenhagen are examples of the same tradition. Tivoli is the best surviving European example of a public garden created and maintained by private enterprise [Fig 4.18]. Its name comes from the town beside the Villa d'Este outside Rome . Vauxall and Ranelagh were laid out in a derivative of the French style of garden design and offered music, dancing, fireworks and light entertainment, all in the manner of Versailles . They were much frequented by the aristocracy. Horace Walpole wrote of Ranelagh in 1742 that 'you can't set your foot without treading on a Prince or Duke of Cumberland ' (Wroth 1896: 200). But even this great enthusiast for the English style of garden design did not complain about the layout: patrons must have adopted the sensible view that a different use justified a different style. Chadwick suggests that private pleasure grounds declined in the nineteenth century as a result of stricter licensing requirements, a new attitude to 'amusement' and 'a competitor in the shape of gardens provided at public expense for public use' (Chadwick 1966: 42). The greatest Victorian park enterprise was Paxton's venture in setting up a private company to move the Crystal Palace to Sydenham and surrounding it with a pleasure ground. The public paid to see exhibitions and the fabulous water features and floral displays in the gardens. When Hyde Park and Kew gardens started to compete, with displays of carpet bedding provided by public expenditure, Paxton complained to the House of Commons about unfair competition. He was especially annoyed that the Crystal Palace could not open on Sunday because of Sabbatarianism (Parliamentary Debates 1896). In America the greatest development of the private enterprise park has been Disneyland and its descendants, which have a mixture of fun, excitement, historical reconstruction, and technical marvels. These features have precedents in the history of garden design: the concealed jets of water and water games in Italian Renaissance gardens, the giant sculptures at Bomarzo, the hydraulic marvels of Salomon de Caus, the eighteenth century English re-creations of the landscape of antiquity and the later 'Egyptian', 'Chinese', 'Japanese', 'American' and 'Alpine' gardens. One Alpine garden, at Friars Park , even contained a miniature Matterhorn . The latest manifestations of the Disneyland idea, at Epcot and many smaller 'Theme Parks' have developed the scientific and funfair aspects of Disneyland . From a park planning viewpoint it is regrettable that theme parks are not set within open space systems and related to the urban structure. An American critic has suggested that Walt Disney's team achieve a higher standard of urban design than American architects (Taylor 1981: 121). Now, the Disney team are producing a residential suburb.

Westerners are often surprised to discover that in the once-communist countries of East Asia, it is normal practice to have an entry fee for public parks for which entry would be free in equivalent North American and European 'public parks'. It is normal to charge for entry Scenic Areas and Theme Parks in China and Vietnam. In Japan, entry fees are charged for famous gardens which once belonged to the aristocracty. In Germany, entry to this type of space is normally free. 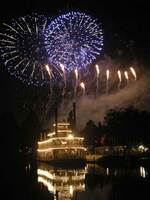 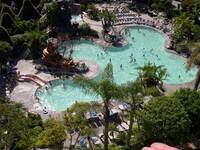