Boulevards are planned for the pleasure which travellers, rather than spectators, can take in moving along a tree-lined street. They derive from defensive bulwarks used as walks [Fig 4.22]. The first curvaceous urban boulevard was made by John Nash in London , though it was not tree-lined. Regent Street, together with Portland Place , linked St James's Park to the new Regents Park which Nash was building on the edge of London . This was conceived as a pleasurable route from the inner city to what was then the edge of London . St James's Park was also linked to Green Park , Hyde Park and Kensington Gardens . The plans of Louis Napoleon and Baron Haussmann for the redevelopment of Paris were influenced by London 's park-filled West End . Louis Napoleon had spent a period of exile in London from 1846-48 and asked Haussmann to include a London-type network of naturalistic parks in his proposals. The Bois de Boulougne and the Bois de Vincenne were the first to be laid out and were linked up through the heart of Paris by formal tree-lined boulevards. The idea of using tree-lined avenues as connecting links undoubtedly came from Le Notre. Boulevards were made in British and American parks during the nineteenth century. In the twentieth century, the greatest development of the boulevard idea was the American Parkway . The design criteria for roads in undulating country lead to a boulevard effect. 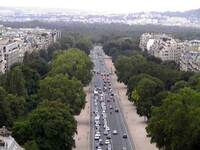