Christopher Alexander argued, in the Pattern language, that each building project must relate to neighbouring patterns: In short, no pattern is an isolated entity. Each pattern can exist in the world, only to the extent that is supported by other patterns: the larger patterns in which it is embedded, the patterns of the same size that surround it, and the smaller patterns which are embedded in it. This is a fundamental view of the world. It says that when you build a thing you cannot merely build that thing in isolation, but must also repair the world around it, and within it, so that the larger world at that one place becomes more coherent, and more whole; and the thing which you make takes its place in the web of nature, as you make it. (Alexander 1977: xiii) 2.16 Building projects should respond to surrounding archetypes and make provision for subsidiary archetypes. The diagram [Fig 2.16] shows how several Alexander patterns might inter-relate. A building project, bounded by the dotted line, should contribute to a set of neighbouring patterns. The diagram's numbering follows the Pattern language. The larger patterns are GREEN STREET (No 51), BIKE PATH WITH RACKS (No 56) and HOUSE CLUSSER(No 37). The smaller patterns are SITTING WALL (No 234), SEAT SPOT (No 241) and PAVING WITH CRACKS BETWEEN THE STONES (No. 247). A development which ignores the pattern nexus will be un-neighbourly. The subject is discussed at greater length in the next chapter (see page...) 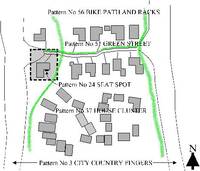