Are bike paths good for cycling?

Cyclepaths and separate cycle lanes are the obvious solution - but one of the best books on cycle planning contains a well-researched and destructive analysis of these ideas [Fig 10.17]. Nobody should plan or build a cyclepath without reading Forester's Bicycle Transportation (Forester 1994 edn.). The author is a lifelong cycling enthusiast with a dispassionate commitment to the principles of transport planning. His arguments are as follows: Cyclepaths are promoted by people who want roads without cyclists cyclists who do not understand traffic engineering Cyclepaths have a higher accident rate than shared bike-car roads. The accidents result from hitting obstacles, other cyclists, pedestrians (especially children) and dogs. Accidents also occur at points where cyclepaths join roads. The mix of slow- and fast-cyclists on a narrow cyclepath is dangerous. Cyclepaths only work in North Europe because they are used by slow-speed cyclists travelling short distances at speeds below 12 MPH. American cycle-commuters travel at higher speeds for greater distances. Motorists are good at seeing what is in front of them and only a small proportion of cycle accidents are caused by cars hitting cyclists from the rear. Most car-bike collisions, which occur at junctions, can be avoided only if cyclists behave as vehicles and occupy a full car space. Many cycle accidents happen to unskilled cyclists. Cyclists cannot be accommodated on high-volume high-speed freeways/motorways/autoroutes. Motor roads achieve their highest flow-rates at 22 MPH. This speed is within the capability of cyclists. The maximum number of journeys made by cyclists on a cyclepath will be less than that made by motorists on roads of the same width. But cycle storage takes up less space than car storage. Cyclepaths will not be used if they result in longer journeys or longer waits at intersections. The validity of Forester's arguments was demonstrated in Britain's new towns. At Milton Keynes, the combined leisure and commuting cycleway system, known as the Redway, was reviewed unfavourably by the Milton Keynes Cycle Users Group soon after its completion. They reported that over half the adult commuter cyclists in Milton Keynes prefer the grid roads, in spite of their dangerous roundabouts, because they are less hilly, more direct and easier to use. Furthermore, the accident rate on the Redway is greater than on the grid roads. It has steep gradients, sharp corners, planting boxes, pedestrians and other obstacles. The likelihood of a serious accident on the Redway is greater than on roads in Central London (Milton Keynes Cycle Users Group 1984). Forester's arguments are persuasive but need to be read with some caution. As an engineer, he tends to see cyclepaths as 'right or wrong', rather than 'sometimes right and sometimes wrong'. Also, his points have less application in Europe, where he disparages cyclists for behaving as 'wheeled pedestrians' who only travel at 12 MPH. American cities have low densities and wide roads which both enable and require cyclists to travel long distances at high speeds. European cities often have high densities and narrow roads, which are a pleasure for the 'slow' cyclist. Having been engaged in debate for many years, Forester may also have learned to exaggerate his case. He enjoys cycle-racing and under-rates the vileness of cycling amidst fast noisy vehicles emitting lung and eye irritants from their exhaust pipes. Furthermore, as his title suggests, his interest lies more in 'transportation' than leisure cycling. Forester concludes that the best provision for cyclists is an extra-wide inside lane on a mixed car-bike road. But he does acknowledge significant exceptions: A leisure cycleway can be separate from roads if it passes through delightful scenery. Cyclists are pleased to use less-hilly routes, or shortcuts which connect two sections of 'real' road. If it is faster, cyclists will use a special path at busy junctions. If this is a bridge it may need a wind shield and a roof. For a very high volume of cycle traffic, it may be worth building a cycle freeway, or veloway. This will require two 1.2m lanes in each direction and a design speed of 40 km/hr (25 MPH) on the level and 53 km/hr (40 MPH) on hills. There is a veloway beside the River Rhine. 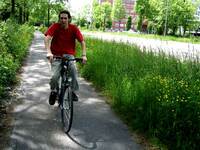