Old roads had many functions. As routes, they accommodated pedestrian, wheeled and animal traffic. As public outdoor space, they accommodated markets, public festivals, children's play and social interaction [Fig 10.3]. Travellers could sleep under trees, while their animals grazed on wide verges [Fig 10.4]. Some roads were spatial designs and works of art [Fig: cross-ref to Edinburgh's Castle St in the previous chapter]. But at some point in history, an analytical mind asked itself the fatal question: 'what are roads for?' 'Transport' boomed the inevitable reply, meaning 'assisted movement' (Ramsey 1990). From this, it apparently followed that the 'best' roads were those which carried the largest number of motor vehicles in the greatest safety at the highest speeds. All other considerations could be merrily jettisoned. Traffic planning became an applied science: applied to the single objective of facilitating motor transport. Roads ceased to be pluralistic and public 'open space'. At the start of the twenty-first century the old way of using roadsspace could be found only in the lands of the ancient civilizations, like India. Donald Appleyard relates that when Californians tried to introduce techniques of calming motorised traffic in the 1970s, the action was ruled to be illegal because it was not described in the highway engineer's Manual (Appleyard 1987). Furthermore, the public had no representation on the only committee which could make changes to the manual: it was composed entirely of highway engineers. Northern California had the same rules as Southern California. This was more social engineering than highway engineering, and a sad instance of Adam Smith's observation that when several members of a trade meet together it is to conspire against the public interest Highway engineering 'design manuals' define a limited number of road-types (eg for various traffic flow levels) and then specify 'criteria' for each. The criteria lead to geometrical 'standards', such as curve diameters and the geometry of road junctions. This produces standard products which disregard contextual factors and the judgements of local communities. It is not that we need 300 types of road, instead of 3, but that every single road should be adapted to local circumstances. Highway engineers oppose diversification, but they can be subject to democratic control. 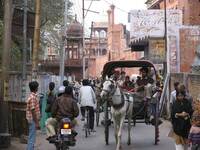