Old books on Japanese gardening contain injunctions as to the selection of trees and plants, which, though often conflicting, and seldom closely followed in practise are interesting as showing the ideal standards by which the early designers were guided, and reveal much of the true spirit of the art. One ancient authority remarks that the first trees to be chosen for a garden are Pines and Cherries. Of the former, he gives preference to the Pinus parvi flora, and among the latter, trees of single blossom are most favoured. Cherry trees of double blossomï¿½in early times confined to the Nara district ï¿½were looked upon as an abnormal production; the beautiful groves at Yoshi-no, the wild trees at Arashiyama (see Fig. 41), and even the Sakon-no-sakura, or Imperial Cherry tree, planted in front of the Kioto Palace, were of single flower. Among Plum trees the same authority prefers those of single and pinkish blossom, which bloom early in the season, but sanctions the limited use of certain double-blossomed kinds on account of their delicious fragrance. He deprecates, however, the employment of the most luxuriant species in gardens, because they flower late in the season, and contemporaneously with the Cherry-blossom, by the side of which they always appear at a disadvantage. Willows, young Maples, and the Podocarpus macrophylla are also much favoured among trees. Referring to plants and grasses, the Kerria, Wistaria, Platycodon, Dianthus, Patrinia, Euphatrium, Poterium, Gentian, Chrysanthemum, Eularia, and Anthistiria are mentioned as invaluable in their respective seasons, and suitable for planting in front of ornamental fences. Very rare flowers, however beautiful, are not considered desirable material for gardens, the scarce and unfamiliar being favoured only by vulgar and ignorant persons. 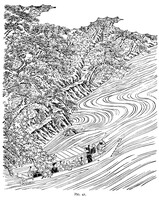