803. The culture of tea in China may be considered as belonging more to agriculture than to horticulture. It appears, from Fortune's researches in 1845, that the principal plant grown in the tea districts in the north of China is Thin viridis, from which both green and black tea is made; but near Canton T. Bohea (fig. 226. a) is mostly grown, and both kinds are made from it. Mr. Main also observed, above fifty years previously (in 1794), that all the different sorts of tea are produced from the same 'kind or variety' of the plant. All writers on the subject are agreed that the leaves of the true tea are adulterated by those of certain other plants. Mr. Main says, 'small proportions of leaves of other plants are sometimes added, but care is taken that it be not detected, as this is considered a deterioration : these are the leaves of the O'lea fragrans (fig. 227. a), and, sometimes, those of the San-cha-yu (Camellia Sasanqua, b) ; in the sort called pekoe, small silvery leaves may be observed, which appear to be those of the To-kune (Azalea indica, c) ; all, however, perfectly harmless, though they have subjected several English dealers to undeserved prosecution. The Chinese, however, deny that any of the latter leaves are ever intermixed.' (Gard. Mag., vol. iv. p. 455.) 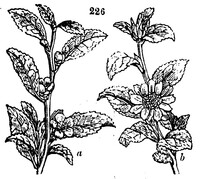