771. Other palms common in Ceylon are, the cocoa nut (Cocos nucifera), the Borassus flabelliformis, and the Caryota urens. The Cocos nucifera (fig. 217.) is applied to a great variety of uses. The coarse filament of the husk of the nut called coir is used throughout India for making rope. Cocoa-nut oil and arrack are well-known productions. The cocoa-nut forests in Ceylon form a belt, of 130 miles in length, and a mile and a half in breadth, along the south-west part of the coast ; and they are scarcely to be found, naturally, any where else in the island. This belt was estimated, when the Dutch governed Ceylon, to contain from 10,000,000 to 11,000,000 cocoa-nut trees, and to produce 6000 measures of arrack, 3,000,000 pounds' weight of coir, besides an immense quantity of cocoa-nut oil. The Palmyra palm, or Borassus flabelliformis (fig. 218.), grows to great perfection in the province of Jaffna. The wood of this species of palm is almost black. It is used all over India for rafters and for the roofs of houses, and is peculiarly valuable from its resisting all insects and being extremely durable. This tree prevails chiefly to the north of Ceylon, where it is as valuable to the inhabitants as the cocoa-nut is in the south ; furnishing a considerable portion of their food, and of the articles which they export. The Kitul tree, or Caryota urens, has given rise, in Ceylon, to a distinct caste among the natives of the country. This caste is called the caste of the Jaggeraros, from the sugar which is made of the produce of the Caryota urens being called Jaggery, and from the whole of the above caste, both males and females, who are very numerous, being employed in the culture of the tree itself, or in the manufacture of the sugar which is procured from it. No sugar is made in Ceylon from the sugar-cane: all the sugar used by the natives of that island is made either from the Cocos nucifera, or Borassus flabelliformis, or Caryota urens. Great quantities of sugar are made from these trees, both for home consumption and for exportation. It is sold for one fourth or one sixth of the price of the cheapest sugar made from the sugar-cane. The Areca nut is the Areca Catechu of Linnï¾µus. This nut is used all over India for chewing with the betel leaf, or the betle pfeffer of Willdenow. There are three species of this nut in Ceylon, which grow to great perfection in the interior of the country, and are much esteemed throughout India. (Trans. R. Asiat. Soc., vol.i. p.545.) 'Most of the shrubs,' Dr. Gardner observes, 'which inhabit the muddy shores of the sea, and of the salt lagoons, which are so numerous towards the north of the island, are known by the name of Mangroves, and belong to the order Rhizophoreï¾µ, a strictly intertropical tribe. My researches have already yielded about half a dozen species. Among the other plants found in the northern provinces, are several kinds of very thorny acacias, the Salvadora Persica (the true mustard tree of Scripture), and the upas.' (Bot. Mag., for 1848, p. 10.) 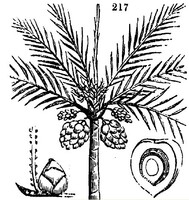