5. Of Gardening in the Island of Ceylon 767. Gardening, as an art of design and taste, can hardly be said to exist on this island, though Sir Alexander Johnstone (Gard. Mag., vol. v. p. 74.) has described the mansion of Rajah Pakse (fig. 214.) as containing an architectural veranda, paved, and agreeably situated with respect to the exterior scenery. The great objects of interest in this island are, the culture of the cinnamon and of the different palms. The country is rich in botany, and abounds in palm trees and plantains. If a Cingalese, says Bucke, possesses a garden, he wants but little more. Two jack trees (Artocarpus incisa), a palm tree or two, and six or eight cocoas, furnish him with enough to make him content 5 and his chief enjoyment is to recline under their shade. (Beauties, &c. of Nature.) [Editor's Note: Ceylon became the Democratic Socialist Republic of Sri Lanka in 1972] 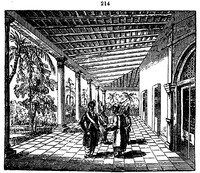