769. The cinnamon tree (fig. 215.) grows wild in different parts of the island, and is cultivated by government in four or five very large gardens. From the bark of the cinnamon tree, the cinnamon of commerce, cinnamon water, and cinnamon oil, are prepared ; and also a very fine oil, like the oil of cloves, is made from the leaves, and a kind of spurious camphor from the roots. Cordiner describes the cinnamon groves as delightful. 'Nothing can exceed the luxury of riding through them in the cool hours of the morning, when the air is cool, and the sweetness of the spring is blended with the glow of summer. Every plant in the garden is at all times clothed with fresh and lively green; and, when the cinnamon laurels put forth their flame-coloured leaves and delicate blossoms, the scenery is exquisitely beautiful. The fragrance, however, is not so powerful as strangers are apt to imagine. The cinnamon bark affords no scent when the trees are growing in tranquillity; and it is only in a few places that the air is perfumed with the delicious odour of other shrubs, the greater proportion of the flowers and blossoms of India being entirely destitute of that quality. Gentle undulations in the ground, and clumps of majestic trees, add to the picturesque appearance of the scene; and a person cannot move twenty yards into a grove without meeting a hundred species of beautiful plants and flowers springing up spontaneously. Several roads for carriages make winding circuits in the woods, and numerous intersecting footpaths penetrate the deepest thickets. In sauntering amidst these groves, a botanist or a simple lover of nature may experience the most supreme delight which the vegetable creation is capable of affording ; and the zoologist will not be less gratified by the variety, the number, and the strangeness of many of the animal kingdom.' (Account of Ceylon, vol. ii. p. 387.) 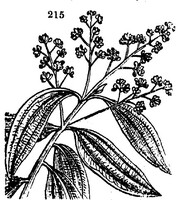