564. Evelyn, in 1652, describes Wooton in Surrey, the residence of his father, as being, for woods and waters, among the most natural and magnificent examples which England afforded, 'till this late and universal luxury of the whole nation since abounding in such expenses.' -'Gave my brother some directions about his garden, which he was desirous to put into some form, for which he was to remove a mountain overgrown with large trees and thickets, and a moat within ten yards of the house;' this his brother 'succeeded in doing, by digging down the mountain, and flinging it into a rapid stream, which carried away the sand, filled up the moat, and levelled that noble area where now the garden and fountain is.' In Bray's Memoirs an engraving is given of these gardens, said to be taken from one by Evelyn himself (fig. 175.). We visited Wooton in the autumn of 1830, and were struck with the close resemblance the ground then bore to the general features which they appear from this figure to have exhibited two centuries ago. The cause is, the main features of the place are natural ones, and these neither time nor art (at least as ordinarily exerted) can entirely obliterate. Groomsbridge, near Tunbridge, Evelyn saw the same year, and describes as 'a pretty melancholy place.' 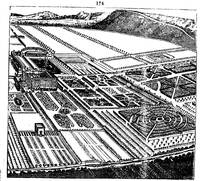