307. The park and gardens of Laxenburg, containing about 300 acres (fig. 73.), belong also to the imperial family. The palace is a building of little interest but from its immensity. The surface of the park and gardens is slightly varied by nature, but more so by art; and considerable effect has been produced by planting in imitation of the natural manner, by pieces of artificial water, and by winding walks. The following are details: ï¿½ a, The village of Laxenburg. b, Palace of the emperor c, Servants' offices. d, Old palace. e, Stables. f, Theatre. g, Barracks. h, Greenhouse. i, Private garden of Prince Francis, the emperor's son. k, Head gamekeeper's lodge. l, Goldfish pond. m, Maison de caprice, including a museum of antiquities, n, Artificial rockwork. o, Farm-house. p, Nursery. q, Place for tournaments. r, Pheasantry. s, Rustic work. t, Temple of Concord. u, Artificial lakes, covering 33 acres. v, Lakes and islands. w, Branch of the river Tirena. x, Haha. y. Hills formed by the earth excavated in making the lakes, the rest of the park being nearly flat. The most remarkable object in this park is the Ritter Burg, which stands on one of the little islands on (unfortunately) perfectly level ground; and contains a great quantity of antiquities and stained glass, which have been collected from old castles and churches throughout the Austrian dominions. 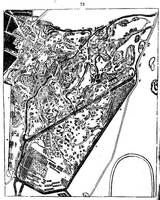