381. The botanic garden at Carlsruhe was founded in 1715, and contains several hot-houses, most on the old Dutch plan; the greenhouses having steep glass fronts, and the hothouses having bonnet-roofs. The bonnet-roofs are a great protection both from the cold and from hail; and they admit of having wooden shutters hinged at the upper ends of the sashes, which can be let down during nights. The bonnet-roof also powerfully reflects the sun's rays down on the glass in winter and early spring, when they impinge on it at nearly a right angle. In 1731, Professor Hebenstreit of Leipzig, and the Carlsruhe gardener, Thran, were sent to Africa for plants. Thran returned successful in 1733, and soon afterwards the first Carlsruhe Catalogue was printed. (Haller, Bibl. Bot., tom. ii. p. 266,) It contained about 2000 species, besides an immense collection of florists' bulbs of the finest varieties. From both about 200 drawings were made by Trew, and described by Ehret. In 1763, Dr. Kolreuter was appointed botanist to this garden. In 1787, Schweyckert, who had studied gardening in England, was made inspector; and through him the garden was so increased, that in 1795 the Hortus Carlsruhanus contained 5000 species. In 1796, the French invasion of this part of Germany caused the garden to be neglected; and in 1806, when the garden inspector Schweyckert died, the number of species had declined to 300, chiefly ligneous plants and annuals. M. Hartweg, the late inspector, was then appointed to the situation, and began by introducing, from Paris, a great many New Holland plants, then rare in Ger-many. The number of hothouses was increased, and the hardy plants better arranged in the Linnï¾µan manner. In 1811, Gmelin published Hortus Magni Ducis Badensis et Carlsruhanus, &c., which contained upwards of 6000 species, In this year the grand duke died, and Agave lurida, which had flowered for the first time in Europe the year he assumed the government (65 years before), again flowered. Various alterations were made; hothouses were built; an additional supply of water was obtained, and foun-tains were added; and in 1823 and 1824 the garden was ornamented with a great many urns and statues. Hartweg published his Hortus Carlsruhanus in 1825, enume-rating above 6000 species. He died in 1830. (Gard. Mag., vol. iii. p. 205.) We visited this garden in November, 1828, and found it exceedingly well stocked and well kept. Among the fine specimens which it contained were, Wistaria Consequana, covering the end of a house, and ripening annually a great number of seeds; Andro-meda arborea, twelve feet high, also ripening seeds; Magnolia macrophylla, ten feet high, flowering freely. In the stove, Chamï¾µ'rops humilis, with fruit, from which, as at Berlin, young plants had been raised; Curtisia faginea, very large; Passiflora maliformis, ripening abundance of fruit every year; Vallisneria spiralis; Phormium tenax, which has ripened seed; and Tecoma radicans, which has attained a large size, and is probably as hardy as the native shrubs; Sophora japonica, very large; Tamarix gallica, twelve feet high; and Salisburia male and female. Rhododendron ponticum is here protected during winter with fern; while R. maximum requires no protection. All the American plants in this garden, and also in the pleasure-ground, are grown in rotten wood and leaves. There is a very large orangery, which was formerly a theatre. The Scarabï¾µ'us nasicornis is hatched from eggs inserted in the bark beds, and the perfect insect flies about in the open air; and, while it excites attention by its singular form, does harm to nothing. But the greatest curiosity in this garden is a weeping willow, planted in 1787, which was nearly thrown down by a storm in 1816. One branch was cut off, and an oaken prop was put under the other (fig. 120. a). The willow sent down a root under the decayed bark of this oak prop, which, in 1829, being increased to about the thickness of a man's arm (b), burst from the bark; and it is supposed that, in a few years, it will render the oaken prop superfluous. In a building in this garden is a very complete collection of seeds, of sections of wood, and an herba-rium. The different seeds are enclosed in broad flat glass phials, named, and placed on narrow shelves, in the order of the Linnï¾µan system. There is a separate set of speci-mens of culinary seeds, named, and covered with a glass case; and also a set of forest tree seeds. The different sorts of kidneybeans are placed on a board divided into small squares, like a draught-board. 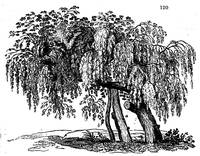