139. Hedges are in general use in Italy, but are very imperfectly formed and managed. In Lombardy the hawthorn is a good deal used; but in Tuscany, the States of the Church, and those parts of the Neapolitan territory which are hedged, the Paliurus vulgaris (fig. 30.) is the prevailing plant; mixed, however, with the Pyracantha, pomegranate, myrtle, Asparagus retrofractus, wild roses, brambles, hazels, reeds, &c. and seldom without gaps and holes, open or filled up with dead bushes or reeds. The willow alone often forms a hedge in Lombardy, where the shoots are valuable for tying up the vine. Between Terracina and Mola, Spence found the hedges mostly composed of laurustinus, sweet bay, and myrtle; while the banks were covered with Erica arborea, Asphodelus ramosus, E'chium italicum, Nonea bulliita, &c. &c., all in full flower, in the first week of March, 1832. (Gard. Mag., vol. viii.) The hedges in Sicily are frequently formed by Agave americana, which, Wood informs us, makes an excellent fence for one or two years before flowering; yet, as the old plant dies immediately afterwards, two or three years elapse before the offsets are sufficiently advanced to supply its place effectually. The cactus is also employed as a fence; but after some time the lower parts of the stem lose their prickles, and men and animals may creep through. (Letters of an Architect, vol. i. p. 354.) 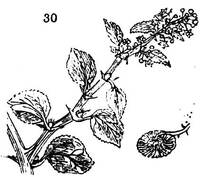