335. The garden of the Glyptothek (fig. 85.) was laid out and planted, in 1827, from the design of Charles Sckell. The Glyptothek (fig. 86.) is a handsome quadrangular building, enclosing an open court, and containing a collection of statues and other sculptures, arranged in chronological order. The garden is liable to all the objections which have been made to the style of the Messrs. Sckell; that of too great a formality in the masses of one kind of tree or shrub. The following are the plan and details: ï¿½ It will be observed that many very serious difficulties presented themselves in laying out this garden. In the first place, the building itself is very large in proportion to the ground; so that it was almost impossible for the landscape-gardener to produce any of those effects of alternate breadth and masses of trees which are so strongly recommended by Louis Sckell in his well-known work on landscape-gardening. In the narrow strips on each side of the building any openings must almost necessarily have exposed the boundary line; and thus, the only possibility of relieving the heavy mass of foliage, was by varying as much as possible the trees and shrubs of which the plantations were to consist, in size, habit of growth, and colour of the foliage. This last effect has been brightened in the plantations round the Glyptothek by choosing trees and shrubs with ornamental flowers to diversify the side masses. 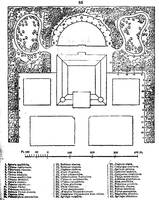