420. Frederiksberg (fig. 127.), his Danish majesty's summer residence, about two miles from Copenhagen, is a most delightful place. The extensive palace is situated on a hill in the pleasure-ground, from which is a beautiful view over the greater part of Copenhagen and some part of the Sound. The pleasure-ground is extensive, and was originally laid out in the Dutch manner. About twenty years since, it was, however, laid out in the English style, by the late M. Voigt, and improvements continue to be made, to a certain extent, every year. It is now one of the most celebrated in Denmark. A fine canal runs through the garden, over which are several handsome bridges, and there is a beautiful little island, called the Chinese Island, besides many other garden scenes, which add greatly to its natural beauty. During all the summer season, the garden is open to the public from early in the morning till late at night. The forcing department, kitchen-garden, orchard, &c., are very extensive, and are kept in good order. (Feldborg's Denmark, &c., Gard. Mag., vol. i. p. 270.) Sondermarken, a beautiful and extensive park, belongs to this palace, and is situated, near it: it is devoted exclusively to the royal family, and is more like a pleasure-ground than a park. A plan (fig. 126.) of the garden at Frederiksberg, taken in 1831, has been kindly furnished us by our esteemed friend, M. Petersen. 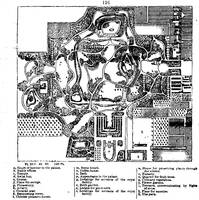