220.The grounds at Bagatelle were formed out of the Bois de Boulogne in 1779 for the Count d'Artois, afterwards Charles X. Tho lawns and glades were cut out of the natural wood; and the remaining trees, though rather stunted from the gravelly nature of the soil, were preserved till the newly planted trees and shrubs had grown high enough to replace them. This villa, after the restoration, was used by the Duc de Berri, as a kind of hunting lodge, up to the period of his unfortunate death in 1820. After the second revolution the place was sold by Louis Philippe, and it now belongs to the Marquess of Hertford, who has spent considerable sums of money every year in improving the gardens, by planting in them every kind of rare tree he could obtain, and who, about 1846, erected a line orangery. Through the kindness of M. La Pie, the geographer, at Paris, we obtained, in 1828, a correct plan (fig. 49.), which will give the reader a very good idea of the disposition of the principal masses. The only view beyond the boundary is obtained from the house and the other buildings; and this view is chiefly the Seine, and beyond it the hill Mount Valerian. The most un-English parts of Bagatelle are the house and offices; and, indeed, it may be observed, generally, that a French house is almost as easily distinguished from an English house as a French garden is from an English one. In general, the faults of Bagatelle are those of most other English parks or gardens in France; viz. too much bustle and display, too many walks, too few trees and shrubs, and too many statues and seats, for the extent of surface. The result of all this is a want of shade, quiet, and repose. There is scarcely such a thing as a solitary umbrageous garden walk in all France. 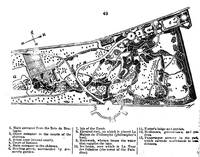