I. Of the fabulous Gardens of Antiquity 4. Gan-eden, an enclosed garden, (from gan, to protect or defend, and oden or eden, pleasure or delight, ) or Paradise, is supposed by some to have been situated in Persia; by others in Armenia; and by others in Chaldea, on the north of the Persian Gulf, near the present Bassora, the river Euphrates dividing there into four streams, in the manner mentioned in Holy Writ. Buckingham tells us that the people of Damascus believe implicitly that the site of Paradise was at El Mezey, near that city; now a favourite place of recreation for the Turks. The waters of the Tege and Barrady, which supply the numerous fountains of Damascus, divide there into four streams, and these they suppose to be the four rivers of Moses. (Buck., Trav. Arab Tribes.) The inhabitants of Ceylon say that Paradise was placed in their country, and, according to the Rev. Dr. Buchanan (Researches in India), they still point out Adam's bridge and Abel's tomb. Sir Alexander Johnston informs us (Trans, of Royal Asiatic Soc.) that they also point out as the tree which bore the forbidden fruit, the Divi Ladner, or Tabernï¾µmontana alternifolia of botanists (fig. 1.). In confirmation of this tradition, they refer to the beauty of the fruit, and the fine scent of the flowers, both of which are most tempting. The shape of the fruit gives the idea of a piece having been bitten off; and the inhabitants say that it was excellent before Eve ate of it, though it is now poisonous. Many other fanciful opinions have been given respecting the site of Paradise, and a Swedish professor in the seventeenth century wrote a book to prove it was in Sweden. (See Atlantica, &c. fol. 1698; Bishop Huet on the Situation of Paradise, 1691, 12mo.; Burnet's Theory of the Earth, book ii. chap. 2.; Sickler's Geschichte der Obst Cultur, 1801, Ister band.) 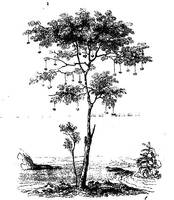