16. The prospect from these elevated gardens was grand and delightful. From the upper area was obtained a view not only of the whole city, and the windings of the Euphrates, which washed the base of the superstructure three hundred feet below, but of the cultivated environs of the city, and of the surrounding desert, extending as far as the eye could reach. The different terraces and groves contained fountains, parterres, scats and banqueting-rooms, and combined the minute beauties of flowers and foliage, with masses of shade and extensive prospects; the retirement of the grove with the vicinity of civic mirth and din; and all the splendour and luxury of eastern magnificence in art, with the simple pleasures of verdant and beautiful nature. ï¿½This surprising and laborious experiment,ï¿½ Geo. Mason considers ï¿½as a strain of complaisance in king Nebuchadnezzar to his Median queen, who could never be reconciled to the flat and naked appearance of the province of Babylon, but frequently regretted each rising hill and scattered forest she had formerly delighted in, with all the charms they had presented to her youthful imagination. The king, who thought nothing impossible for his power to execute, nothing to be unattempted for the gratification of his beloved consort, determined to raise woods and terraces even within the precincts of the city, equal to those by which her native country was diversified.ï¿½ (Essay on Design, p. 9.) These gardens have not been forgotten in the inspired pictures of Martin, who has realised, in his painting of the ï¿½Destruction of Babylonï¿½ (fig. 3.), all that the most vivid and fertile imagination could conceive of Eastern splendour. The fine effect of the cedar and the cypress in these gardens has been ably illustrated by a writer in the Gard. Mag., vol. i. p. 119. It is observed by Major Rennell, that there are now very few trees, or even bushes, and both of very diminutive stature, to be found on the supposed site of this monument of royal extravagance and folly. 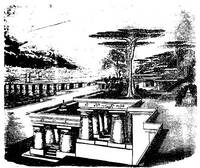