2144. The circulation of hot water in hermetically sealed tubes is the invention of A. M. Perkins, Esq., the son of the celebrated American engineer. This plan will be readily understood by the diagram (fig. 637.); in winch a b is a coil of wrought-iron tubes, about an inch in diameter, by one of which tubes (c) the hot water ascends and circulates, and by another (d) it returns to be again beated. The fire is made in the centre of the coil at e; not in direct contact with the tubes, but separated from them by brickwork, over which the heat and smoke pass, and circulate in the flue which contains the coil. The fuel is put in from above, and the ashes are taken out below. As water is practically an incompressible fluid, it is evident that if the hermetically sealed pipes were completely filled with it, and heated, they would burst; but, to provide against this, after the pipes are filled as high as g, there is what is called an expansion tube (f) added, which allows of the expansion of the water in the form of high-pressure steam. The advantages of this mode of heating are its economy and neatness; but its disadvantages are, the danger of accidents by the bursting of pipes containing water so intensely heated, the unpleasant smell frequently perceived from the pipes, their inequality of temperature, and the rapidity with which they cool when the fire slackens. (See Encyc. of Domestic Economy, p. 85.) 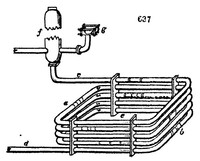