Another mode of ventilation at Frogmore

2158. Another mode of ventilation is practised at Frogmore, which is applicable to a span-roofed house, and which will be explained by the following details. Fig. 649. is a perspective view of a cherry house, the front lights in which are hung top and bottom on pivots, opening as casements by means of levers, which are acted upon by the screw or worm a, in figs. 650. and 651.; a wrought-iron flat bar (b) runs along the whole length of the house, and works through brass rollers, fixed upon the sill; c c c are iron levers attached to this bar, working upon pivots, at their junction with it: they are also attached, by joints at d d d, to the bottom rail of the fronts. In fig. 650. the lights are closed, but by turning the screw (a), the bar (b) slides forwards: but as the points (d d d) of the levers (e e e) are fast to the front lights, they cannot slide with it, and they are brought gradually into the position shown in fig. 651., opening the lights, which turn on a ball and socket joint at the same time. Fig. 651. shows the lights only partially open, but one revolution and a half of the worm (a) opens them to their full extent at right angles with the building; the set screw, shown at m, holding them at any point required. On the top of the house, is a lowered ridge, into which opens a flap or door the whole length of the house, but divided at intervals to gain bearings. The end of this flap is seen at f in fig. 648.; it moves upon its centre into the position shown by the two lines. In fig. 648. it is closed, but by turning the worm (g) one revolution, it, acting upon the upright rod (h), and curved lever (i), which is attached to the extremity of the flap, opens the whole length to the full extent, the set screw, as in the front lights, holding it at any point required. (J. B. Jones.) 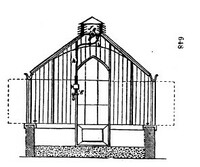