1825. Plant packing-cases are of various kinds, according as plants in a growing state, plants in a state of rest, and with or without leaves, cuttings, bulbs, or other roots, or seeds, are to be packed. Each of these kinds varies also according to the distance to which it is to be sent, climate, season of the year, and mode of conveyance. In sending plants in leaf from this country to the Continent, and the contrary, a close-bottomed box hooped over (fig. 448.), was formerly used; the cover of the upper part being either netting, or, if matting, very frequently removed. These boxes have, however, been quite superseded by what are called Ward's plant cases, which are now almost universally used for packing plants. 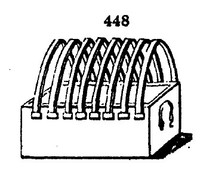