1708. The Leicestershire or shifting-blade hoe has the convenience of having a movable blade, and thus admitting the use of blades of different sizes. The various forms of the hoe are shown in fig. 332., in which d is the head, consisting of a socket for the blade, and a tubular socket or hose for the handle, without the blade; b, one of the blades not inserted in the socket; c, the socket with the kind of blade inserted which is used for general purposes, and more especially for hoeing between rows of drilled crops; and a, a socket with the blade (b) inserted, which is used chiefly for thinning turnips. Fig. 333. is a section across the socket of the full size, showing the slit (c) in which the blade is inserted. The use of the shifting hoe is, that a man when he goes to hoe turnips in a field may take five or six blades for his hoe in his pocket, which he can change in succession as they become dull, which they very soon do, and thus a great deal of time is spared. 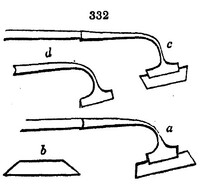