1705. The flower transplanter (fig. 314.) consists of two semicylindrical pieces of iron with handles, and which are so inserted in the ground as to enclose a plant with a ball of earth between them. In this state they are attached to each other by two iron pins, and, being pulled up, bring with them the plant to be removed, surrounded by a ball of earth. This being set in a prepared excavation surrounded by loose earth, the transplanter is then separated as at first, and, being withdrawn, one half at a time, the earth gently pressed to the ball containing the plant, and the whole well watered. Tender plants thus transplanted receive no check, even if in flower. One of the best of these instruments, Hurdis's flower-transplanter (fig. 318.), consists of a cylinder about six inches long and five inches and a half wide, open at top and bottom, and with two handles (a): the lower edge of this cylinder is serrated, with four saw teeth, which, with the rest of the edge, are sharpened by a file when necessary. There is a bottom into which the cylinder (b) fits; two segments (c); and a pronged instrument (d). Supposing it desired to remove a hyacinth, the cylinder is placed over the plant, and worked into the soil till it is filled up to the brim. The cylinder, with the plant and soil which it contains, should be then lifted up, and placed on the bottom (b), which fits so tightly as to adhere, without any fastening. The two flat semicircular pieces are afterwards to be placed on the surface of the soil, on each side of the stem of the plant. It may now be watered and kept in the instrument as in a common flower-pot, or carried to any distance; when it is to be replanted, the bottom (b) being taken off, the plant and ball of earth may be pushed through the cylinder into a pot, or a hole in the soil, as may be desired, by pressing on the semicircular plates (c) with the pronged instrument (d). The same arrangement is particularly favourable for packing or sending to a distance. 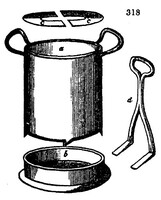