1713. The digging hoes of the French and Spaniards (figs. 342. to 345.) are very numerous; they are used as substitutes for the spade in stirring the soil of the vineyards, and they are better adapted for hilly, stony surfaces, and for women and men who do not wear shoes, than spades. They are, however, gradually disappearing before the latter implement, in all the best cultivated districts of France. Various other forms of these hoes are in use in Spain, particularly in the mountainous districts: some of these are almost heart-shaped, others vandyked, and others square; all looking strange and uncouth to our eyes; and all extremely difficult to manage in the hands of persons who are not used to employ them. As, however, in some cases, they partake more of the character of the pickaxe than the hoe, they are admirably adapted for hard, clayey soils, such as are found in some of the French and Spanish mountainous districts, where, indeed, scarcely any other tool would be serviceable; and, heavy and uncouth as they appear, they are easily wielded by the brawny arms of the mountaineers. As, however, they are not likely to be ever used in this country, they are merely given here as objects of curiosity. 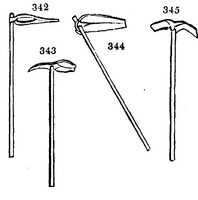