In making choice of Gothic bow-windows for additions to an old house, and, at the same time, to preserve the correct proportion of the whole, the apertures of the glass ought not to be too large, nor the munions too slender. We should select the best specimens of such remains as may be found in our old manor-houses, without copying the defects. The plates [figs. 172, 173, and 174] annexed, serve to shew the difference betwixt the same window munions, &c. of an ancient bow-window, and a modern one, as adopted at Barningham Hall. The engraving [fig. 172] shews an original window, supposed to be erected in the reign of Queen Elizabeth, with all its faults, in respect to modern comfort, such as the glazing in lozenges, heavy iron casements, and upright iron bars; also the great inconvenience of the sill being too high above the floor; and, lastly, the lofty panels, which tend to depress the height of the room. 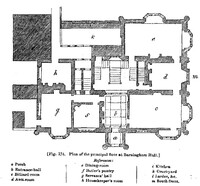 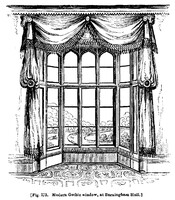 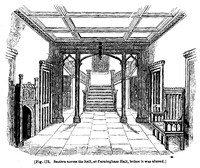