As it is impossible to keep any one flower border fully dressed for the whole summer, and as it suits me that it should be at its best in the late summer, there is no attempt to have it full of flowers as early as June. Another region belongs to June; so that at that time the big border has only some incidents of good bloom, though the ground is rapidly covering with the strong patches, most of them from three to five years old, of the later-blooming perennials. But early in the month there are some clumps of the beautiful Iris Pallida dalmatica in the regions of grey foliage, and of the splendid blue-purple bloom of Geranium ibericum platyphyllum, the best of the large Cranesbills, and the slow-growing Dictamnus Fraxinella (the white variety), and Meadowsweets white and pink, Foxgloves and Canterbury Bells, and to the front some long-established sheets of Iberis sempervirens that have grown right on to the path. The large Yuccas, Y. gloriosa and Y. recurva, are throwing up their massive spikes, though it will be July before they actually flower, and the blooms on some bushes of the great Euphorbia Wulfenii, although they were flowers of May and their almost yellow colour is turning greener, are still conspicuous and ornamental. Then the plants in the middle of the wall, Choisya ternata and Clematis montana are still full of white bloom, and the Guelder Rose is hanging out its great white balls. I like to plant the Guelder Rose and Clematis montana together. Nothing does better on north or east walls, and it is pleasant to see the way the Clematis flings its graceful garlands over and through the stiff branches of the Viburnum. The more brilliant patches of colour in the big border in June are of Oriental Poppies intergrouped with Gypsophila, which will cover their space when they have died down, and the earlier forms of Lilium croceum of that dark orange colour that almost approaches scarlet. 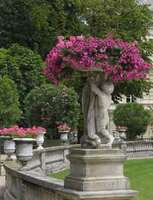