Book: Colour schemes for the flower garden
Chapter: Chapter 4 Between spring and summer

When the Spring flowers are done, and before the full June days come with the great Flag Irises and the perennial Lupines, there is a kind of mid-season. If it can be given a space of ground it will be well bestowed. I have a place that I call the Hidden Garden, because it is in a corner that might so easily be overlooked if one did not know where to find it. No important path leads into it, though two pass within ten yards of it on either side. It is in a sort of clearing among Ilex and Holly, and the three small ways into it are devious and scarcely noticeable from the outside. The most important of these, marked 1 on the plan, passes between some clumps of over-arching Bamboo and through a short curved tunnel of Yew and Ilex. Another, marked 2, is only just traceable among Berberis under a large Birch, and comes sharply round a tall Monterey Cypress. The third turns out of one of the shady woodland glades and comes into the little garden by some rough stone steps. The plan shows the simple arrangement, the paths following the most natural lines that the place suggests. The main path goes down some shallow, rough stone steps with a sunny bank to the left and a rocky mound to the right. The mound is crowned with small shrubs, Alpine Rhododendrons and Andromeda. Both this and the left-hand bank have a few courses of rough dry-walling next the path on its lowest level. A little cross-path curves into the main one from the right 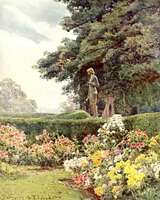