Book: Colour schemes for the flower garden
Chapter: Chapter 1 A march study and the border of early bulbs

A nearly similar arrangement of flowers for earliest spring has been made at a place where a path from the lawn branches into three grassy ways up into the copse. The planted promontory is a bank rising from the grass paths and is set with a few large stones. As it is backed by Hollies and Junipers, and then by the Birches of the wood, it has a back planting of such shrubs as both accord in colour with the flowering plants and lead suitably to the further woodland. These are Rhododendron praecox and Andromeda (Pieris) floribundaï¿½a wide-spreading Savin is already behind themï¿½while the front planting is stiffened by some of the early blooming Heaths, Erica carnea in one or two colourings and E. hybrida. There is also, though the bloom will not be till later, a kind of backbone of Alpenrose (Rhododendron ferrugineum), which gives a certain aspect of strength and solidity. Through April and May the leaves of the bulbs are growing tall, and their seed-pods are carefully removed to prevent exhaustion. By the end of May the Ferns are throwing up their leafy crooks; by June the feathery fronds are displayed in all their tender freshness; they spread over the whole bank, and we forget that there are any bulbs between. By the time the June garden, whose western boundary it forms, has come into fullest bloom it has become a completely furnished bank of Fern-beauty. 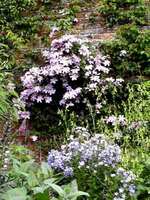