The cottage ornee may have more or less ground attached to it. It is the ambition of some to have a great house and little land, and of others (among whom we remember the poet Cowley) to have a little house and a large garden. The latter would seem to be the more natural taste. When the grounds of a cottage are large, they will be treated by the landscape gardener nearly like those of a villa residence; when they are smaller a more quiet and simple character must be aimed at. But even where they consist of only a rood or two, something tasteful and pretty may be arranged.* In Fig. 28, is shown a small piece of ground on one side of a cottage, in which a picturesque character is attempted to be maintained. The plantations here are made mostly with shrubs instead of trees, the latter being only sparingly introduced for the want of room. In the disposition of these shrubs, however, the same attention to picturesque effect is paid as we have already pointed out in our remarks on grouping; and by connecting the thickets and groups here and there, so as to conceal one walk from the other, a surprising variety and effect will frequently be produced in an exceedingly limited spot. (* For a variety of modes of treating the grounds of small places, see our Designs for Cottage Residences.) The same limited grounds might be planted so as to produce the Beautiful; choosing, in this case, shrubs of symmetrical growth and fine forms, planting and grouping them somewhat singly, and allowing every specimen to attain its fullest luxuriance of development. 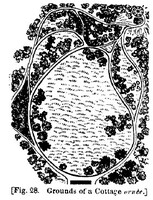