In the next figure (Fig. 24) a ground plan of the place is given, as it would appear after having been judiciously laid out and planted, with several years' growth. At a, the approach road leaves the public highway and leads to the house at c: from whence paths of smaller size, b, make the circuit of the ornamental portion of the residence, taking advantage of the wooded dells, d, originally existing, which offer some scope for varied walks concealed from each other by the intervening masses of thicket. It will be seen here, that one of the largest masses of wood forms a background to the house, concealing also the out-buildings; while, from the windows of the mansion itself, the trees are so arranged as to group in the most pleasing and effective manner; at the same time broad masses of turf meet the eye, and fine distant views are had through the vistas in the lines, e e. In this manner the lawn appears divided into four distinct lawns or areas bounded by groups of trees, instead of being dotted over with an unmeaning confusion of irregular masses of foliage. The form of these areas varies also with every change of position in the spectator, as seen from different portions of the grounds, or different points in the walks; and they can be still further varied at pleasure by adding more single trees or small groups, which should always, to produce variety of outline, be placed opposite the salient parts of the wood, and not in the recesses, which latter they would appear to diminish or clog up. The stables are shown at f; the barn at g, and the kitchen garden adjacent at h; the orchard at i; and a small portion of the farm lands at k; a back entrance to the out-buildings is shown in the rear of the orchard. The plan has been given for a place of seventy acres, thirty of which include the pleasure grounds, and forty the adjoining farm lands. 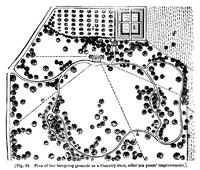